Every time I hear this phrase, it makes me vomit a little bit.

I actually didn’t know this was a thing before a few years back, when I saw the actual documentary by Bonnie McFarlane.
https://www.imdb.com/title/tt3992752/

It’s a heartfelt look at her life as a comedian, and I wonder sometimes if she actually does ask herself the question.

The movie traces the struggles and stereotypes women face in the comedy world, and perhaps in the world at large. 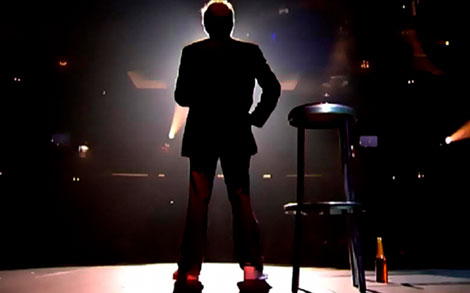 This had never struck me.

My mother had always made me laugh.

I had never noticed a discrepancy between my female and male peers in terms of humor.

I had always known of female and male comedians in France, and my lack of knowledge in different cultures precluded any further judgement.

I actually thought of myself as rather good humored.

Where was this coming from?

Nowadays,  I’ve come across this stereotype many times, and I’ve started to form a hypothesis as to why this might be.

When you listen to male and female comedians, you hear a drastically different narrative.

Men will talk about aggressive topics, and pick someone to make fun of, whether present or not, interspersed by penis jokes.

Women will rather tend to try to make you relate to a situation.

Create a bond over something common.

Bear in mind that most humor is meant as relatable somehow, but there are different ways to relate. For instance, talking about a your own penis is relatable only vicariously.

Talking about a societal problem known to be shared by many people, and not specific to the comedian is another.

To put it another way, there is relatability in exclusionary terms, and relatability in inclusionary terms. A joke about your penis (or a vagina) is meant to exclude anyone who does not have one. A joke against a specific group is meant exclude that group.
A joke about a common experience is meant to include people within that experience, but does not exclude anyone else. You get to relate through metaphor and extension. Talking about a shared struggle excludes no group.

So in a sense, you could argue that your penis or vagina joke is meant to include those with that shared experience. But we know that those groups are based on non-transferable characteristics, and serve as segregatory symbols. For instance, what is the first difference you think of when you think of men and women. Yep, you think of their genitalia.

It’s the most obvious marker of difference, and limit between the groups. It’s the most difficult to push aside. When you make a joke about your penis or your vagina, you are purposefully cloistering your group.

But there does seem to be an average difference in tone.

And I believe this explains why you hear so many men say “women aren’t funny”.

This lies in the flawed assumption about where humor rests.

Humor is not intrinsic to the statement.

Humor rests in the reason for your laughter.

For instance, laughter is a mystery to science.

It seems to be a socially evolved mechanism, but it serves no biological adaptive purpose.

We laugh for different reasons, one of which is to signal to the aggressive majority that you are part of it, which entails that you will not be the one under aggression.

You are part of the dominant group, and you are signaling it.

Another reason to laugh is to signal that your aggression is not a real aggression. It is a mock aggression, meant to tighten bonds.

Notice how both of those reasons so far relate to aggressivity.

Laughing is also a way to dehumanise the target of your laughter. If you laugh at somebody, you are more accepting of them suffering. They are not a person anymore,

There may yet be other reasons.

But this may be a seed of answer.

There’s another side to this story.

I found them rude, insensitive, punching down, often gross and repetitive.

I found most of their humor cheap, and unappealing to me. I couldn’t relate to any of it.

Again, there were exceptions. There are exceptional story-tellers like Louis CK or Ricky Gervais. But even they sometimes fall prey to the off Penis joke, or slightly rapey homophobic vibe.

I used to put this aside thinking perhaps I was in fact just too politically correct? To put it in other terms, perhaps I didn’t need any more triggering bullshit when I was trying to relax.

But the more I think about it, the more I feel there may be another reason, related to different humor and laughter purposes.

This is when a female comedian of talent is a breath of fresh air.

I am travelling for a time in Chiang Mai.

This city in Thailand is a little jewel, and If you haven’t been yet, I thoroughly recommend it.

If you are a digital nomad, there is always something to do in the evening.

It’s an open mic type event where would be comedians get to perform and try out their new material.

I went with no expectations.

And I wasn’t surprised by the many penis jokes, bestiality jokes, lesbian sex jokes and so on.

The odd story about child trauma was in fact rather funny in a tragic way, but that’s often how it is with humor.

Then the most wonderful thing happened.

A woman, announced by the host as having been forced to come on, stepped in the center of the temporary stage.

As soon as she stepped on, she set the tone for her brief but effective set.

She explained that this entire set had been crafted within the evening, and would make white men incredibly uncomfortable, and that would be ok.

She anchored her humor in intersectionality, explaining how white privileged men come to thailand to benefit from the luxury that the different economy allows them, and hope to easily rope on a Thai woman to become their toy wife.

Except, she pointed out, karma is a bitch, and thai women are woke to that.

She satirised the unfortunate turn of events for white men who can afford to buy their new thai wife a house, and leave on business, only to come back to  changed locks and a thai stranger comfortably living in their new luxurious home with their wife.

She took the time to explain, with acid in her tone, that reparations come in different forms, and not always from the ones who caused the initial harm. But since white men have caused so much of it, and benefitted so strongly, it seemed like the thai women really were only enacting poetic justice.

She really did make me laugh.

I wasn’t the only one.

There were a few cringing white boy faces.

To be honest, if I’d been a white boy, I probably wouldn’t have been laughing.

But when I think about it, I wasn’t laughing at the white men’s misfortune.

Laughing is a way to dehumanise, we’ve already seen this, so it may explain in part why I didn’t start crying over their demise.

But I laughed because I was happy for the thai women and their empowerment.

This is why I think Seheri Swint, the comedian propelled in front of us that night, was so brilliant in her set.

She appealed to different kinds of humor.

There was a form of aggression towards entitled white men, and a relation to community and relatability through the thai women.

She wasn’t just hitting a group, she was propelling another group. This was triumph, and justice.

To sum up, I don’t think men only laugh for one reason, and women for another.

I don’t think men only have one type of humor and women another.

I laugh at many things, unrelated to however I identify one day.

But I do believe we are socialised based on the gender we are assigned. And this socialisation pushes us to seek out certain things over others. It pushes us to find comfort differently.

I find comfort through a community that promises a shared relatable emotional experience. I don’t specifically enjoy aggressivity. Someone else might, and they’ll find other things appealing.

The idea isn’t to segregate or consider one to be better. It’s to understand that if you don’t think one thing is funny, may not make it intrinsically funny or not. That’s why standpoint is important.

Your vision of reality isn’t wrong.

It’s a necessary component of a larger mosaic.

We find community building to be an important part of providing support for women and fostering a growing movement.

In this page, we will review the various events we take part in. You will find details on how inclusive they were and what we found beneficial about attending. All our own events will also be available here so that anyone interested my join us.

This is also our way to promote initiatives that help women succeed, so don’t hesitate to share with us your own reviews, or prospective events.

Photo by Elevate on Unsplash